The 'art world' should be ashamed that one of the last refuges of artistic beauty and value is not in the art world, but in the art produced by the artists of the video game industry ... I think there is more beauty and value in a single screenshot here than in all the works of the "Tate Modern" put together:

http://www.videogamer.com/wii/secret_files_tunguska/screenshot-4.html
(And there's plenty more like this out there.)

The rich, expansive virtual worlds created by video game artists are, in a loose sense, 'virtual art galleries' - they're often 'larger' than 'real' art galleries, you can comparably 'explore' them, and every virtual detail is almost like a small piece of art in its own right.

If you're ever in London, try this "experiment": Visit the National Gallery (for its classical paintings collection) in the morning, and the Tate Modern in the afternoon. Observe the contrast in your own reactions. Also, watch the people - observe the contrasting effects of psychological engagement (for classical paintings), vs disengagement (for modern art), between art and viewer. 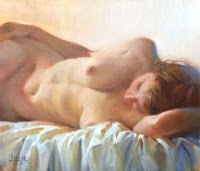 Artists, make art beautiful and life-affirming. If it's going on my wall, or if I must see it in a public space, it should improve my day when I look at it. There is no shame in making the world a more beautiful, pleasant place to live in - quite the contrary.

If you want to "make a statement", grammatically-arranged words are a more suitable, less ambiguous medium for doing so. (Yes, there are certain limited contexts where images can "make a statement" - for example, an image of a nude female in a society that strictly outlaws images of female nudity does make a 'political statement', in context. But to really 'make statements', there's no substitute for human language - it is, in practice, our only common communications medium truly suitable for formulating complex arguments. E.g. try use a painting, rather than words, to explain the rational arguments for why it's wrong to outlaw images of female nudity, without resorting to words anywhere (not even the name of the painting). You can't.)

Another common argument for modern art is that it has value in evoking some subjective personal interpretation or thought process within individual viewers - and yes, this is a real effect. But when you think about it, this reduces a piece of art to little more than a Rorschach inkblot, which does the same thing. Rorschach inkblots may well be useful in certain contexts, but that doesn't mean it's a particular achievement to create one. The viewer is projecting something internal onto the painting - the origin of any value in any evoked thought processes, is the viewer's own mind. "Art as inkblot" isn't enough.

The emperor is naked, and "modern art" is barren and valueless. If you don't "get it", it's not you - there just isn't much to "get".

Don't tell me loftily that paintings created by a horse are a "procedural homage to Pollock" - the obvious response should be to realize the absurdity that we revere painters like Pollock for achievements that amount to little more than what's on offer from a horse. Granted, these are good - for a horse - but human artists can and should do better than horses, we can create works of far more richness and value. Don't let your life's work be on par with that of a painting horse's novelty 'circus act'.


The primary value of modern art is probably as a lesson that the story of the naked emperor is not far-fetched (e.g. this chap can't stop gushing about the emperor's new clothes).

"If art is to flourish in the twenty-first century, it must renew its moral authority by rededicating itself to life. It must be an enriching, ennobling and vital partner in the public pursuit of civilization. It should be a majestic presence in everyday life just as it was in the past." - Frederick Hart